Netball is full of role models that range from players, coaches, officials and administrators. All of which have contributed to the sport, and in return inspiring others to do the same. Read through the stories of just some of netball’s truly great role models.

“Netball is a pillar of development and can lead to sustainable development of both individuals and the community at large.” – Peace Proscovia

A true inspiration and a great role model to the sport, Uganda captain Peace Proscovia, has inspired millions of netball fans across the world with her journey to the top.

Peace grew up in the Arua District in north-west Uganda, where young girls were seen as a ‘source of wealth’ and often forced into marriage at an early age. One of Peace’s sports teachers at school identified her as a very talented athlete and by the age of 16 Peace wanted to pursue a career in the sport.

At eighteen years old, Peace moved over 800 miles to the capital Kampala, where she would play for a team sponsored by the The National Insurance Corporation, in which Peace would also work for. At first, her father was very reluctant about the move, but Peace stood her ground, thinking it would pave the way for her family and the girls in the community.

Her impressive performances on court caught the eye of the Uganda Christian University, who offered Peace a scholarship to play netball and study.

Peace at the Netball World Cup 2015 in Sydney, Australia.

While playing for Uganda in a Netball World Cup qualifier, Peace attracted interest from English Superleague club Loughborough Lightning. The deal would go through and Peace was heading to England, to play in the UK’s elite netball league.

There was no looking back from this point on as Peace would establish herself as one of the best shooters in world netball, with personal and team accolades flooding in.

Peace was influential in Uganda’s rise up the INF World Rankings, which helped the She Cranes secure a spot at the Commonwealth Games for the very first time, in which Peace herself was the country’s flag bearer. Peace also led Uganda to victory in the Africa Championships in 2017.

In 2018, Peace was announced as the first ever INF Global Ambassador. In 2017, she spoke at the INF Congress in Gaborone, Botswana, where she brought those in attendance to tears with her inspiring journey. Watch the speech below:

From such humble beginnings, Peace has become one of sports’ biggest stars and continues to inspire globally, making her one of netball’s great role models.

One of the most recognisable umpires; Sharon Kelly.

“Being an umpire has taught me an immense amount about integrity and professionalism and this in turn has altered my outlook in life.” – Sharon Kelly

It all began as early as eight years old, when Sharon played at school where her mum and sister were already involved in the sport.  She has always played, umpired and coached for the same Association – Northern Suburbs in New South Wales – and her commitment was recognised when she was honoured with becoming a Life Member in 1989.

In a career as illustrious as Sharon’s, it would always be very difficult to choose a stand out highlight. Having umpired major finals, umpiring at events such as the Commonwealth Games and the Netball World Cup, and also being named Australian Umpire of the Year countless times, it would always be a tough choice for anyone. We asked Sharon and she said:

“It is very hard to pick one career highlight.  My first Test Series in 1998 between Australia and New Zealand stands out as a highlight and I suppose as the first step to many opportunities that then came my way.

“As the pinnacle competitions of our sports, it was always an enormous honour to be selected to umpire at Commonwealth Games and World Championships.”

Sharon talks very fondly about what netball has done for her personally: “Netball has given me opportunities to see parts of the world that I never dreamt of seeing. Of making friends and colleagues from all walks of life and learning from each and every one of them. Being an umpire has taught me an immense amount about integrity and professionalism and this in turn has altered my outlook in life.

“However the best part of being a netball umpire, is being able to participate and with your skill, enhance a game for all to enjoy playing and/or watching.”

On a final note, what’s her advice to aspiring umpires?

“Work on skills and techniques of umpiring, the rules are only a part of it. Work with coaches and players at all levels, it’s the best education you’ll get.” 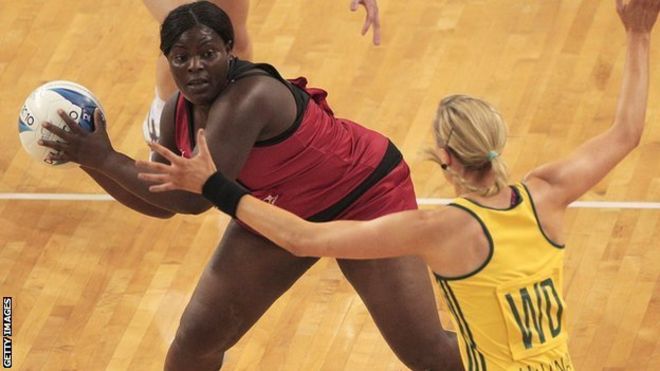 country’s best players and was the former national team’s coach.

Mary Waya came to international prominence during the 2007 World Championships in New Zealand, where the Malawian national team finished 5th, their highest ever placing. She remains the national team’s most high-profile player, and was chosen as the flag bearer for the Malawi team at the 2010 Commonwealth Games in Delhi.

“Don’t give up, get the right people around you and keep working hard.” – Mwai Kumwenda

Malawi netballer Mwai Kumwenda has been crowned Athlete of the Year by the International World Games Association (IWGA).

Kumwenda was one of 18 international athletes nominated for the IWGA award, from a cross-section of sports. She was crowned as the clear winner by an online poll.

Kumwenda, who plays professionally for Mainland Tactix in New Zealand, was awarded Player of the Tournament at the Netball World Cup SYDNEY 2015. Her win was backed by impressive statistics – 91% shots on target. With 321 goals in eight games, she was the only player to score over 300 goals.

The 26 year-old shooter was delighted with the win: “I feel so excited and honoured that so many people around the world have voted for me – I really appreciate it.”

Kumwenda first played netball aged 15, in her village in Malawi, she is now an international netball star who plays professionally for the Melbourne Vixens in Australia, and she recognises the progress she has made: “This is important for me because netball has been my life from a very young age. I would never have thought, in a million years, that I would win this award.

“This has been a journey – a journey of small steps, with each step dreaming of the next. It has been a journey of great support from all around me – family, friends, coaches, team-mates and most of all my fans around the world. This is also important because, to all those young girls and boys just starting out with the same dream, I would say ‘don’t give up, get the right people around you and keep working hard’.”

Mwai was nominated for the Award by the International Netball Federation. Clare Briegal, CEO, said: “This is great recognition for a superb role model in netball. As well as being a world class athlete, Mwai embodies women’s empowerment, and is a fantastic inspiration to so many people all around the world.”

Molly Rhone says: “Winning this Award is not only good news for Mwai but for her country, Malawi, and netball in general. Mwai has excelled through hard work and dedication to netball and is really deserving. She is a great role model for young girls and I congratulate her most heartily.”

The IWGA is an organisation recognised by the International Olympic Committee. Its principal aim is to develop the popularity of the sports governed by its 37 Member Federations, which includes the International Netball Federation, to improve their prominence through excellent sporting achievements, and to conserve all the traditional values of sport through The World Games, which take place every four years. The 10th World Games was held in Wroclaw, Poland, from 20-30 July, 2017.

Mwai wrote a recent blog for the Players Voice, where she talks about her journey. It is a truly inspirational read which you can read here.