Netball is an exciting, fast and skillful game of fair contest. It is a game in 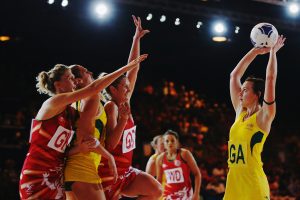 which two teams of seven players each strive to keep or gain possession of the ball.

The team with the ball, through running, jumping, throwing and catching, attempts to move the ball into its goal circle from where a goal may be scored, while the opposing team uses defensive movements and strategies to prevent this and to gain possession. The team with the greater number of goals is the winner of the match.

Players have specified areas in which they can move. Play restarts after each goal with teams having alternate possession. The Rules are based on the core values of equal opportunity, fair  play and respect for an opponent’s skill  and safety.

It is the responsibility of players to ensure that they are physically and technically prepared in a manner that enables them to play the Game, comply with the Rules and participate safely in a sporting and fair manner.

It is the responsibility of those who coach or teach the Game to ensure that players are prepared in a manner that ensures compliance with the Rules of the Game as well as an understanding of both sporting behaviour and safe practices.

It is the responsibility of umpires to apply the Rules of the Game with impartiality, fairness and consistency.

It is the responsibility of controlling bodies at all levels to ensure that the Game is conducted and developed in accordance with disciplined and sporting behaviour.

If you are interested in finding out more about Netball you can access the Rules of Netball here on this site, or from any of the national netball associations that are affiliated to World Netball or from World Netball itself – info@worldnetball.sport