A Message from the Hon. Molly Rhone OJ, CD, President of the International Netball Federation

When I reflect on 2016, I am filled with a sense of pride 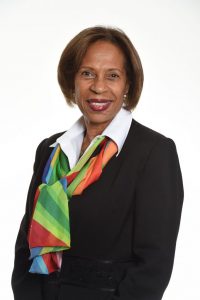 for everything that has been achieved throughout the year.  Netball is growing, not just in participation around the world, but in awareness too, as a sport that exemplifies everything that is best in sport.

In a sporting world which has been tarnished by issues such as corruption and anti-doping, netball stands tall.  We are a clean sport, we continue to take a leadership stance recognised at the highest level for keeping children safe in sport. We are
proud of our role models, looked up to and respected by young children and adults at every stage of the game.

From Malawi’s national player, Mwai Kumwenda, who was last year hailed as the International World Games Association’s Athlete of the Year, to Netball Australia’s CEO, Kate Palmer, who has just been appointed the first female CEO of the Australia Sporting Commission, Netball is sending out an important message, inspiring more young people to play netball, and blazing a trail for women leaders in sport globally.

As we enter this year, we are buoyant and excited, with our key strategic priorities of Governing with Integrity, Thrilling World Class Events and Empowering through Netball firmly at the heart of everything we do.

We look forward to our Netball World Youth Cup in Gaborone, Botswana in July, a platform for the world’s finest netball youth players to showcase their talent.  This is the first ever global sporting event to be held in Botswana and the first time the INF has held an international sporting event in Africa.

Our Congress will also take place in Gaborone, bringing all our members together to shape the future of netball globally, with Netball 2020, our strategic vision, at the fore front of our planning.

We also look forward to another thrilling Fast5 Series, following on from the show stopper event in Melbourne this year.  This high-octane, fast and furious shortened version of netball is rapidly gaining in popularity with fans, players and broadcasters alike all over the world.

As we continue to work with our global partners to develop ground-breaking and award-winning development programs, we are using our proven ability to empower, demonstrating that netball truly is a force for good.

I look forward to an even more successful year for netball and wish each and every one of you a very safe and productive 2017.

With my very best wishes