The Africa Netball Cup begins in Windhoek Namibia on the 9th November, and runs until the 16th.

It will be the second series Namibia have hosted this month, with Botswana, South Africa and Tanzania joining the teams that recently competed in the Pent Series.

The last time this event took place was in 2019, when South Africa hosted and competed in the tournament for the first time in 9 years and were crowned champions.

However, having just finished the Pent Series unbeaten Uganda will be hoping they can cause upset in the Cup. 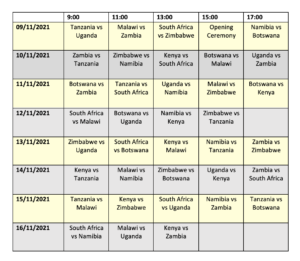 Congratulations to the below Officials who have been selected for the event:

To keep up to date on the latest results, make sure you are following the Namibian Netball Association on Facebook.

You can watch all the games live on Facebook here.

Good luck to all teams involved!

For more information on the Africa Netball Cup, click here.