From a Sports Star to an Actor: JMC Alumna Prachi Shares her Story

Indian TV Actor and Retired Netball Player, Prachi Tehlan, was invited to attend the Commerce Department of Jesus and Mary College’s department fest – Com’Acumen to be a part of their inaugural ceremony. 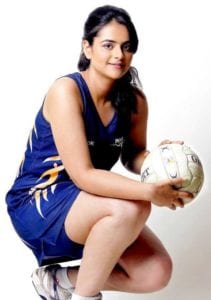 Prachi has shared her journey of being a sportsperson through to a corporate employee and finally, an actor.

‘I was the youngest Netball captain at Commonwealth Games 2010’

Prachi represented India in Netball at the Commonwealth Games 2010.

‘I played netball for four years. Netball happened to me because of Jesus and Mary College (JMC).’

From Netball, Prachi has now gone on to be a successful actress.

‘While I was working, a big production company reached out to me on my Facebook fan page, which was originally made for my Netball achievements.  They asked if I was interested in doing a role in ‘Diya Aur Baati Hum’.

Prachi moved to Mumbai and started her Acting career.

It’s amazing to see a former Netball Captain develop such an amazing career, all from her Netball Facebook Page.