Two Jamaican shooters can’t stop scoring in Australia, the leaders remain three clear in New Zealand and the semi final line up in the UK’s Vitality Superleague has now been confirmed. Read on for our national leagues round up…

In Australia, West Coast Fever bounced back from last weekend’s defeat with a convincing 20 point win over the Adelaide Thunderbirds to return top of the league. A draw earlier in the day between the Sunshine Coast Lightning and the Giants, meant that Fever were temporally leapfrogged by the Giants.

Fever’s Jamaican goal shooter, Jhaniele Fowler-Reid, was once again on fire under the post. When both sides met earlier in the season, Reid set an Australian national league record with 66 goals. She equaled her own record, notching another 66 goals, taking her season’s tally to 443.

The Melbourne Vixens continued the winning formula with a 65-57 away win against the Collingwood Magpies in the Melbourne derby. Vixens trailed by seven before a big third quarter. Liz Watson was influential in the comeback, providing a total 29 assists in which Mwai Kumwenda (42/43) and Tegan Philip (23/24) would convert.

Elsewhere, the Queensland Firebirds defeated the NSW Swifts in another close game between the two. They last met in round one where the Swifts just edged the victory. Jamaica’s Romelda Aiken converted 43/49, in a victory that sees the Firebirds move into second place. 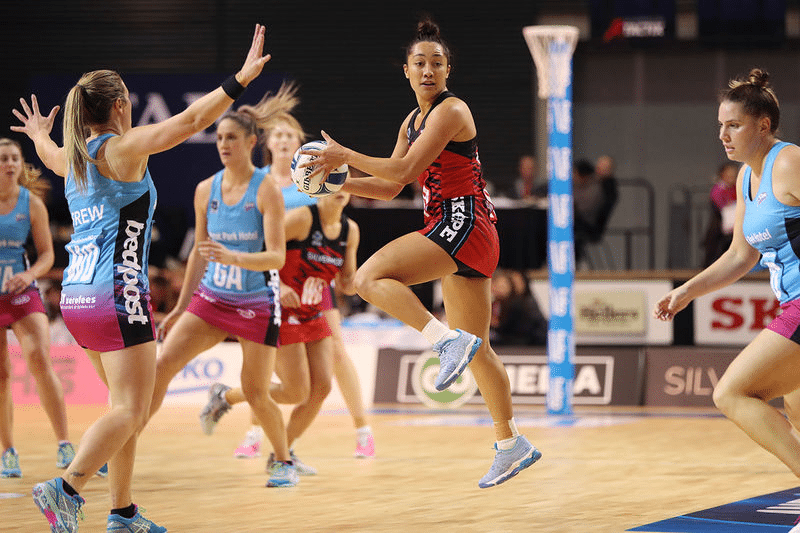 Over to New Zealand, where the Central Pulse remain three points clear at the top of the table following their 66-50 victory over the Northern Stars. Tiana Metuarau converted 26 times while assisting a further 19 goals. The leagues top scorer, Aliyah Dunn, converted a further 40 times for the Pulse, taking her season tally to 337.

Elsewhere this weekend, Mainland Tactix came out victorious in a thriller against Southern Steel. When these sides met earlier in the season the scoreline was also 53-52, however that time it was Steel who were victorious. This time the spoils went to the Tactix who are now only two points behind Southern Steel who currently occupy second position.

The semi final line up in the UK’s Vitality Superleague has now been confirmed with Wasps, Loughborough Lightning, Manchester Thunder and Team Bath all making the final four.

Both semi finals will take place this coming Saturday on the 30th June.

In the final round of the league format, Wasps defeated Team Northumbria 60-45 leaving their record this season on 16 wins and 2 defeats. Loughborough Lightning had an away trip to Surrey in which they would seal a 63-41 win. As for Manchester Thunder, they ended their league campaign with a 54-47 win over fellow semi finalists Team Bath.

The benecosMavericks finished just outside the top four and lost their final game 49-47, away to UWS Sirens. Severn Stars and the Celtic Dragons play their final game of the campaign on Monday night.