Fiji and Samoa qualify for the Netball World Cup 2019

A big game opened proceedings on day four. If Cook Islands were to win they would have been level on points with Samoa going into the final day, however, Samoa kept their composure and lead throughout.

They opened up a five goal lead after the first fifteen, which was cut down to three just before half time. Samoa would increase the lead in the second half and the Cook Islands just couldn’t quite overturn the deficit.

The win means that Samoa will be competing at their 8th consecutive Netball World Cup next year in Liverpool.

Fiji opened up a commanding 20-5 lead in the first quarter which was never overturned. Papua New Guinea did win the third quarter 11-10, however, Fiji’s lead was too strong and never in any serious danger.

With a game left to spare, Fiji qualify for their sixth consecutive Netball World Cup.

The two qualifiers meet tomorrow on the final day of competition to determine who qualifies in first place. Elsewhere, Cook Islands will end their campaign when they meet Tonga.

Re-watch any of the action so far by heading to our YouTube channel here. Head to our Facebook page or Twitter profile to watch the action unfold live tomorrow. 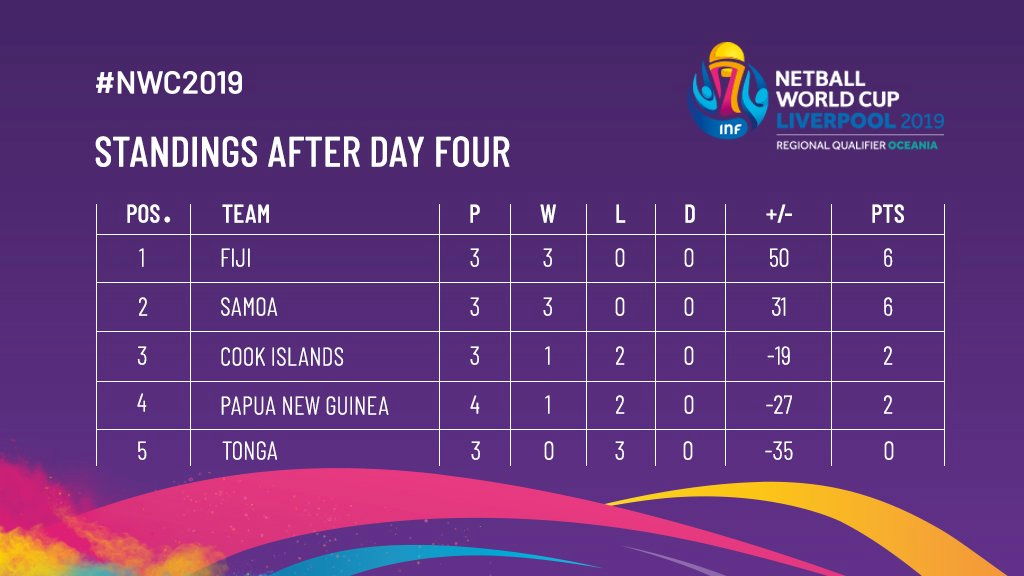