The Mission Foods Nations Cup is well underway in Singapore. Here is what went on during the first two days of competition.

The first game of this years tournament saw the hosts Singapore, take on Ireland. It was the perfect curtain raiser for the competition with it being tightly contested throughout the match. It was Singapore who took the first goals of the game with a couple in quick succession. The Irish got themselves back into it however, with goal shooter Jan Hynes impressing in the goal circle. The first half finished all square at 26-26, after two 13 all quarters.

Goal attack, Toh Kai Wei, made her Nations Cup debut for Singapore and maintained a 76% goal conversion rate throughout the match. Toh’s smart shooting gave Singapore the edge going into the final quarter as they would lead 43-36. Ireland had to overturn a six goal deficit in the final fifteen to salvage anything from the game. Both sides were level with five minutes remaining at 50 all. As the clock ticked down, the draw looked certain, however, an interception in the mid-court allowed the Irish to score right at the end, to win the opening game of this year competition.

This was Cook Islands inaugural game in the Nations Cup, in which they put on an impressive display. Malaysia, who won gold in the SEA Games netball final back in August, trailed throughout the match despite scoring the first goals of the game. Cook Island’s goal attack, Leah Cherie Pue, certainly impressed with several interceptions that would lead to a goal being scored.

Cook Islands led for the next three quarters and maintained an impressive 84% goal goal conversion rate compared to Malaysia’s 67%. They couldn’t quite breach the 70 goals milestone but a win by a margin of 34 is an impressive opening game result.

The final game of day one, saw Hong Kong take on Swaziland. It was another fierce opening quarter with Hong Kong taking the early advantage, leading at quarter time by 12 goals to 8. Swaziland enjoyed a much better second quarter as they overturned the four goal deficit to go into half time 20-19 up.

Swaziland utilized the long pass option many times in the third quarter, extending their lead and remaining in control. Swaziland had impressive shooting stats, only missing ten attempts at goal throughout the match. The deficit proved to be to much for Hong Kong as they couldn’t get themselves back into the game, losing 36-48 at full time.

Ireland started proceedings on day two looking for their second win of the campaign. They were up against Malaysia who were searching for their first win. Malaysia started the better side with goal shooter Khairunnisa Nazri scoring the first three goals of the game. Malaysia would see out the lead and remained ahead after quarter one.

Things started to change in the second quarter, as Ireland took the lead following good work in the mid court. The beginning of the second half had a similar theme with Ireland taking control. They increased their margin going into the final quarter.

Both sides were impressive going forward but it was Ireland who were more clinical, with a conversion rate of 84% compared to Malaysia’s 68%. The Irish held out their lead to win their second match of the tournament.

The second game of day two was another closely contested game between the Cook Islands and Hong Kong. Both sides traded goals during the opening quarter and continued doing so in the second. Hong Kong were forced into a change during the second quarter as wing attacker Stephanie Cuvelier suffered an injury. Scores at half time was 21-20 in favor of the Cook Islands.

Cook Islands Ashleigh Iro had an impressive second half with multiple steals that helped increase their lead. Once again the Cook Islands enjoyed impressive scoring stats, scoring 48 out of 56 attempts. They saw their lead out to maintain their 100% win record in the tournament. 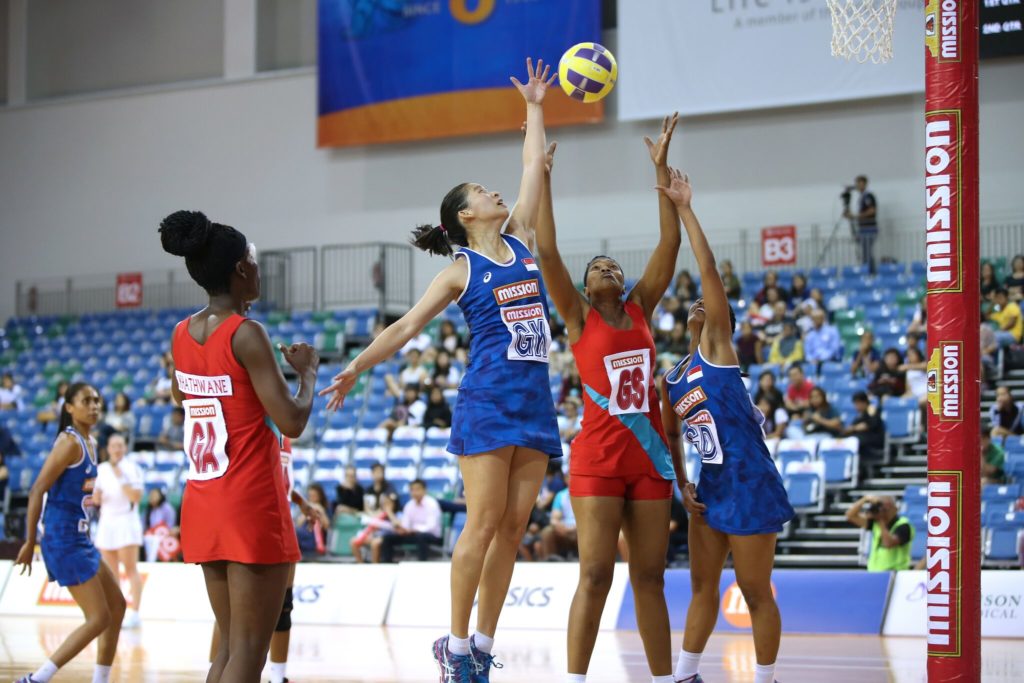 Day two came to a close with the hosts in action against Swaziland. Having lost their opening match against Ireland, this was a crucial game for Singapore. They started well, however, Swaziland with their slick efficient passing took control of the game and led 18-11 at quarter time.

Much like in their opening game, Swaziland utilized the long ball to create scoring chances. Goal shooter, Sebenzile Nxumalo converted an impressive 98% of her shots on goal for Swaziland, which helped them to a 34-25 lead at half time.

Nxumalo continued to impress and helped extend her side’s lead in the second half. Swaziland carried a 50-38 lead into the final quarter which Singapore could not overturn.

Swaziland’s win sees them join Ireland and the Cook Islands with two wins from two, while Singapore join Malaysia and Hong Kong with no wins as of yet.

Day three will see Ireland and Cook Islands put their undefeated record on line against each other, Malaysia will play Swaziland and the hosts Singapore will play Hong Kong.