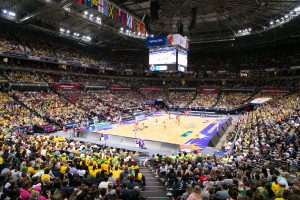 INF has a portfolio of high quality international events including the Netball World Cup, the Netball World Youth Cup and the Fast5 Netball World Series. INF publishes a calendar of International Events that includes Member test series and regional competitions. INF maintains a world ranking system for international teams and appoints the match officials for all ranking matches from a pool of International Umpires. Netball is increasing its profile through its inclusion in multisport games such as the ANOCA Youth Games and the South East Asian (SEA) Games. Netball is a core sport in the Commonwealth Games and strives for addition to the Olympic programme. INF aims to increase the global reach of the sport and increase the profile and visibility of sports and role models that appeal to women and girls. Event management and participation in world class events provides empowerment opportunities for our Members, their administrators, players, coaches and officials.