The draw for the Netball World Youth Cup 2017 took place in Gaborone, Botswana this morning.

The International Netball Federation’s first ever Netball World Youth Cup will be staged next July in Gaborone, with 20 teams from all over the world competing, following regional qualifiers.

The teams were drawn into four pools as follows:

“Participation of young women in this World Cup is an encouraging sign for us to steadfastly continue our efforts of providing sport programmes that nurture, empower and develop our youth. We cannot underestimate sport as a vital activity for the holistic development of our young people because it fosters their physical, social and emotional health.”

INF President, the Honourable Molly Rhone, OJ, CD, thanked the Minister and the Government of Botswana for their support and commitment to the first ever Netball World Youth Cup and said:

“One of the key strategies for the International Netball Federation over the next four years is to ensure our audiences, fans, teams and broadcasters enjoy thrilling world class events. I have no doubt that Botswana will make this a truly spectacular event.”

She further added: “I am also certain this event will enthuse and inspire more young people to play our great sport and leave a lasting legacy, which will grow and develop netball and create an even further positive impact on many young people and their communities.”

“It is really pleasing to be at this point of conducting a Draw and it’s amazing that Botswana is drawn into the same pool as Cook Islands.”

“It is a real honour for me to be Chairing the Local Organising Committee for this prestigious event. This is a great opportunity for Botswana and we look forward to delivering a world class event.”

The Draw concluded with the unveiling by the INF President of the spectacular new Netball World Youth Cup trophy. 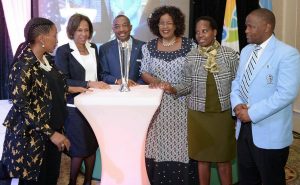