Singapore, 12 November 2016 – The fourth edition of M1 Corporate Netball Challenge (M1CNC) saw a great turnout of 41 corporate teams coming together at Kallang Netball Centre for a fun day of netball under Competitive and Social mixed categories. They include teams from the banks, legal and audit firms, GLCs and MNCs. 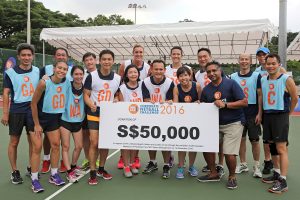 New Zealand netball legend, Leana de Bruin, World Champion and Commonwealth Games double gold medallist, made an appearance at the M1CNC to meet participants and fans and played in the charity exhibition match between Members of Parliament and M1 Senior Management. As part of the M1 Schools Programme, De Bruin will also be conducting netball clinics for schools and the National age groups, sharing her tips and tricks with young, aspiring netball players during her visit in Singapore.

Ms Jessica Tan, Member of Parliament, and President of Netball Singapore noted, “Seeing returning companies and new companies forming teams to participate in the M1 Corporate Netball Challenge is very heartening. I’m pleased to see the growth of netball among corporates. It is particularly great to see colleagues, male and female, coming together during a weekend to play netball and enjoying the game.”

“As a long-term supporter of the Singapore netball scene, we are happy to see so many of Singapore’s leading corporates turn out for a day of competitive fun. We would like to especially thank Mr Tan Chuan-Jin, Minister for Social & Family Development, Mr Teo Ser Luck, Minister of State for Manpower, and our Members of Parliament Ms Cheryl Chan, Ms Jessica Tan, Mr Zaqy Mohamad, as well as Mr Bruce Liang, for gracing our event,” said Mr P. Subramaniam, Chief Marketing Officer, M1.

In appreciation of the Members of Parliament’s participation, M1 will donate S$50,000 to the underprivileged children and youths-at-risk causes of its adopted charities.