With 2017 now well underway, some of the world’s international netballers have been adding to their airmiles. Read on to find out more about some of the international players relocating to the UK to take part in the Vitality Netball Superleague, and how four U21 teams stepped up their preparations for July’s Netball World Youth Cup at a tournament in Fiji. 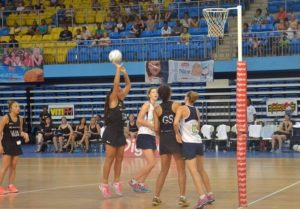 Check out Fiji Netball on Facebook to see more photos and scores from the games.

From Serbia to Australia
One of the world’s greatest tennis players met a netball legend this week in Melbourne. World number 2 tennis player, Novak Djokovic, who is in town for the Australian Open, took on Sharelle McMahon, one of Australia’s greatest ever players, in a netball shooting competition. Watch the video to see how they each fared! 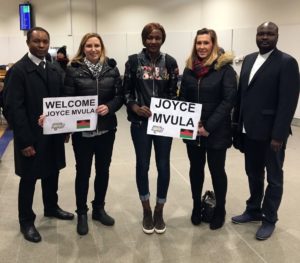 From Malawi to England
One of the risings stars of the Malawi Queens has quickly been finding her form with her new Vitality Netball Superleague team, Manchester Thunder. Joyce Mvula was welcomed at the airport last week by representatives from Thunder, as well as the Malawi High Commission. She was straight into action over the weekend, shooting 40 goals from 45 attempts in a pre-season friendly against Celtic Dragons. 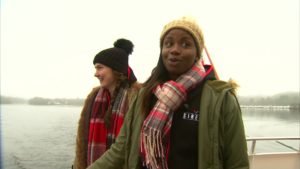 From New Zealand and Jamaica to Scotland
New Zealand Silver Fern Ellen Halpenny and Jamaican Sunshine Girl Nicole Aiken-Pinnock have swapped the warmer climes of their home countries for a Scottish winter, as two of the imports for the Scottish Sirens Vitality Netball Superleague team.

The pair are pictured on Loch Lomond, where Nicole took her first ever trip on a boat for a feature on Sky Sports. Follow @SirensNetball on Twitter to see how Ellen and Nicole get on.

From England around the world
It is over 120 years since netball was introduced by Madame Bergman Österberg, at her college in Dartford, England. Now, the Bergman Österberg Union is endeavouring to trace students and staff members who attended the college before its closure in 1986.

Did you train or teach at the college and enjoy playing and teaching netball? If so, the Bergman Österberg Union would love to hear from you. Visit bergmanosterbergunion.org.uk to find out more, or email elliott@christobel25.orangehome.co.uk or joancmills@aol.com.