We love seeing netball grow in different parts of the world, and this week we are celebrating the growth of netball in South America.

During the last few months of the year, Netball Argentina has sent level two coaches to three countries within South America: Chile, Colombia and Uruguay, to teach them netball and help them to prepare a team to come to Buenos Aires in February to compete in their International Open.

Here is how the three countries got on…

In Chile 42 students, from two Universities, participated in a netball workshop delivered by coach, Maximiliano Cohen.

The students were very enthusiastic and have decided that they will start playing netball so that they can send a team to the Open in February.

Off the court, they also spent time finding out about the history of Netball and the philosophy of the coach, to develop their overall netball knowledge.

Following the sessions, they also now aim to be able to enter a team into the International Open.

Finally, in Uruguay, coaches Lucas Marquez and Tomás Ceron, travelled to Montevideo to deliver a workshop in the Physical Education (PE) teachers’ training institute to help with the development of Netball in Uruguay and encourage them to come with a team to the Open in February. 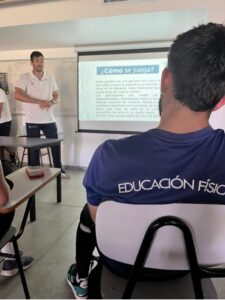