All You Need to Know: Netball World Cup Qualifiers – Africa

The event will be hosted by Netball South Africa,  and will take place in Pretoria where the hosts South Africa, as well as Namibia, Zimbabwe, Botswana, Tanzania, Malawi, Zambia, Kenya and Eswatini will all be participating.

The two top finishing teams from the event will then be invited by World Netball to compete at the NWC2023, this does not include South Africa who have already pre-qualified for the NWC2023 as hosts.

If South Africa finish in the top two, the third place team will be invited to compete at NWC2023.

The competition will be playing in a round-robin format with the 9 teams split into two pools based on the most recent results from the Africa Cup 2021 final placings.

Here are the two pools:

Draws will not be allowed in the play-off matches, and extra-time will be played in the event of a tie at the end of the 4th quarter.

Here is the schedule: 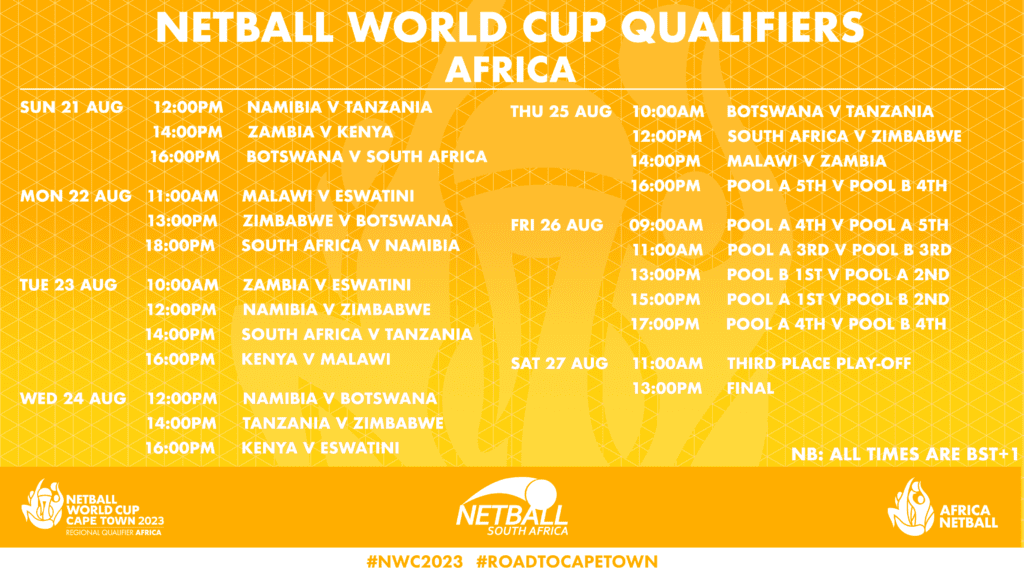 International viewers will be able to watch all matches live for free on NetballPass, here.

Those in Sub-Saharan Africa* will be able to catch all of the action via SuperSport.

All the matches will also be streamed live on the SuperSport App.

Speaking on the excitement of the event, Director of Africa Netball,  Cecilia Molokwane said: “Playing at a World Cup is a dream of any athlete, representing your country at that level is the highest honour.

“As we get ready and prepare to host and stage the first ever Netball World Cup on African soil , I am extremely excited and humbled that we will also get an opportunity to host the Africa Netball World Cup Qualifiers right here in our rainbow country South Africa.

“This will serve as a perfect yardstick to gauge our state of readiness with a year to go until the Netball World Cup 2023 and help us to prepare.

“As a country (South Africa), it’s truly an honour to host our sister countries as we all campaign to represent our respective countries at next year’s World Cup.

“We have been very intentional about ensuring that we take netball back to the people and make netball fashionable, but most importantly awakening the giant that is sleeping that is Africa, such events help us in bringing that vision to life.”