The Roses Reunited Test Series started yesterday at the Copper Box Arena, London, with the England Roses making a second half come-back against Jamaica to secure the first victory of the series.

Both teams went into the competition off the back of victories, with the England Roses most recently winning the Taini Jamison Trophy in September and Jamaica winning the Jamaican Sunshine Series in October.

Jamaica got the game underway with Adean Thomas at centre, and made no mistake scoring off their first centre pass.

World Netball Ambassador for the Americas region, Shamera Sterling, was a force to be reckoned in Goal Defence making her presence known in the centre and goal thirds for the Sunshine Girls as she made multiple interceptions.

At the other end of court England’s defensive duo, Layla Guscoth and Stacey Frances-Bayman, worked hard to keep 6ft 5 goal shooter Jhaniele Fowler away from the post, but the Jamaican shooter continued to covert her shots at every given opportunity allowing the Sunshine girls to end the first 15 minutes leading England 10-11.

Jamaica went on to finish the first half just as strong extending their lead, and forcing England to make their first change of the game, taking off Helen Housby and replacing her with Eleanor Cardwell who scored at the first time of asking, however Jamaica still kept their marginal one goal lead at half time.

Following a strong defensive display in the first half, the second half became a shooting masterclass which England capitalised on, fighting back  to take the lead 41-33 in the championship quarter.

With such a close scoreline it was all still to play for in the final 15, but it was the Roses that ran away with a 55 – 45 win in front of a sold out Copper Box Arena.

The Roses Reunited Series will continue next weekend with the sides going head-to-head two more times in Nottingham on the 4th and 5th December, when you will also be able to watch two leading men’s competitive sides, London Giants and Knight’s Men, in action.

You can watch the rest of the Series and re-watch todays match in the UK on Sky Sports YouTube now.

Here are some pictures from our day at the Copper Box Arena: 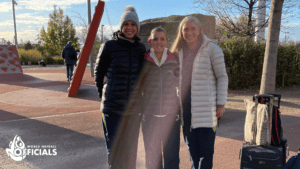 England and Jamaica take to court

To see more pictures and videos from the day visit our Instagram and watch our ‘Test Series’ highlights.