The 2021 Pent Series came to a close on Friday in Namibia, with Uganda being crowned champions.

Malawi also had a strong tournament with their only defeat coming against the champions Uganda on the second day of competition.

Here are the final standings at the end of the tournament: 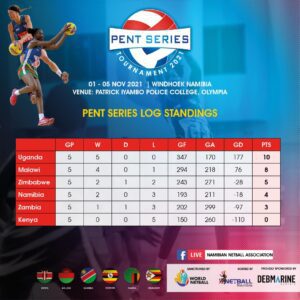 You can catch up on all the action from the Pent Series on the Namibian Netball Association Facebook page where all the game were live streamed.

Well done to all teams involved.

The attention in Namibia now turns to the African Netball Cup which begins on the 9th November.

To find out more about the African Netball Cup, click here.