England Netball; the national governing body for netball in England, has today announced the appointment of Joan Mills MBE as its new President.

Joan’s appointment in this voluntary role comes as her fellow England Netball Honorary Life Member Lindsay Sartori steps down from the helm after five successful years.

Joan, who started her first netball club at just 16 and hails from Kent, has a wealth of netball experience in the sector; from holding a position as England Netball Chair to being an International Netball Federation Technical Delegate for the 2014 Commonwealth Games and the 2019 Vitality Netball World Cup.

Throughout the years, Joan has dedicated herself to boosting the sport’s growth and profile, something that was recognised in the Queen’s 90th Birthday honours in 2016 when she was awarded an MBE for her services to the game.

As part of her role as President Joan, who has thrice trekked in the Himalayas and kayaked in both Alaska and the Arctic Circle, will continue her work supporting the netball National Heritage and Archive Group, who are responsible for preserving the history of our sport. Her passion for the sport and for driving participation, involvement and opportunities within netball is evident.

Colin Povey, Chair of England Netball, said: “We are delighted to name Joan as President of England Netball. She is a huge advocate for the sport and has contributed massively over the years in many different roles. She continues to promote and drive forward the game at a grassroots through to elite level and has played a part in numerous major competitions over the years, I have no doubt she will continue to be a huge asset for England Netball. I’m excited to have her continue to help us build on our recent successes and look forward to working with her.

“We are of course sad to see Lindsay go from the position, her input has been invaluable during her time as President. She chaired the National Heritage and Archive Group, she’s championed the contributions of our many volunteers and hosted visiting nations during the 2019 Vitality Netball World Cup, plus much more. Lindsay has volunteered in the sport for over 40 years so I’m sure she’ll still have a strong presence within netball moving forward. We’re pleased she could leave this pivotal role in the capable hands of Joan.”

Joan commented: “I am passionate about the sport of netball and want to see England be number one in the world, not just in World rankings, but as the number one women’s sport in the eyes of the media and general public from participation numbers, volunteering, officiating at all levels from grassroots to top-level competition in the Premier and Vitality Netball Superleague. I have high hopes and ambitions for the sport and am excited to get started in this new role.”

Joan takes on the crucial role of President following netball’s recent move to stage 4 of England Netball’s return of community netball roadmap, which has started to see netballers the length and breadth of the country step back on netball courts. You can find out more about England Netball’s Roadmap and its #RiseAgain campaign, which aims to return the sport’s pre lockdown momentum, on England Netball’s website. 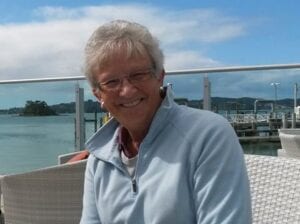