The International Netball Federation (INF) hosted a webinar on the INF World Ranking on Saturday 20th June for INF Members. The webinar provided further guidance and information on the INF World Ranking system and saw over 75 attendees from INF member countries in addition to members from the Rules Advisory Panel (RAP) and Coaching Advisory Panel (CAP).

The International Netball Federation completed a global survey with Members in May 2020 to determine what areas of the World Ranking system needed further clarity and to capture ideas on how the rankings may be further developed. The webinar was presented by David Kendix, actuary and statistician, who was appointed in 2007 by the INF to create the mathematical model for the INF World Ranking system and hosted by INF CEO Clare Briegal.  It included information on the basic principles, how the rankings are calculated, how the model will be adjusted in light of the COVID-19 pandemic and allowed Members to get answers to their questions.

When the annual update takes place on the 1st July 2020, the INF Board has decided that the number of matches required to be played in order to have a ranking will be reduced from eight to six. This will allow countries who have not been able to play eight matches in the period due to the suspension of international play as a result of the COVID-19 pandemic to maintain their ranking. This decision will be reviewed by INF prior to the annual update in 2021.

To find out more information on the INF World Ranking system and the current world rankings, click here. 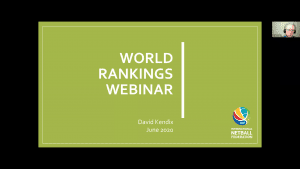