On the 23rd and 24th March 2019, the Netball Association of Zambia (NAZ) invited over 600 women and girls from across the country to participate in a tournament hosted at the Olympic Youth Development Centre in Lusaka.

During the event, Bessie Chelemu Director of Sport for Zambia led a forum which invited public, private and civil stakeholders in netball to participate as they continue to work together to develop a shared future for netball. The event was the biggest annual gathering of netball stakeholders in Zambia.

With so many stakeholders and community clubs involved, the event showcased Netball’s continued ability to inspire and empower women and girls around the world.

NET2019 aims to empower women and girls through netball providing coaching advice and facilitated netball sessions. The International Netball Federation (INF) continued to support NET2019’s ambition to increase the strength and depth of coaches and umpires, by facilitating an African Coaching and Officiating Framework (ACOF) course during the event.

To find out more about the NET2019 Legacy Programme, visit the Netball World Cup 2019 website here. 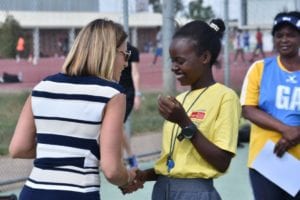 Constellation Cup – Everything You Need To Know