The programme, aimed at developing the physical literacy of young children, is fronted by a charming netball character called Bib. Bib guides little netball players on their first journey into the world of netball: from their very first pass of the ball onwards.

Netball tots will be run by approved deliverers who will have been trained to deliver the programme by Welsh Netball. Approved deliverers will utilise the netball tots resource pack which contains a complete set of resource cards. This includes 10 different ‘adventures’ to take young players on, with each adventure linked to a specific netball theme. Progress through the programme is marked using Bib’s netball tots sticker book. 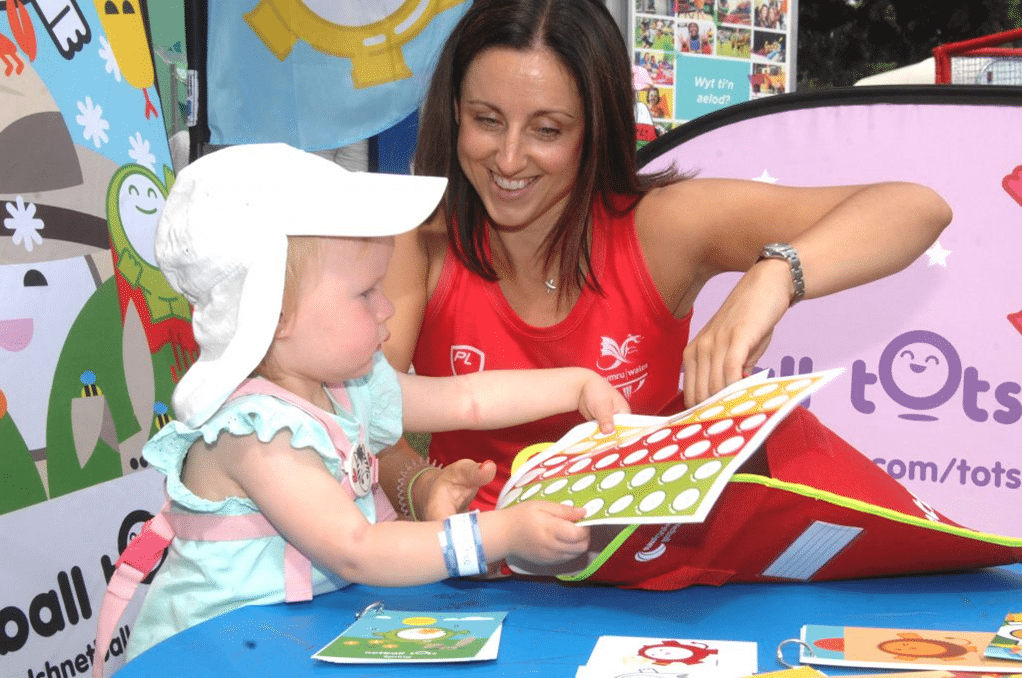 Wales international Suzy Drane was present at the launch

He said: “Netball tots is a revolutionary development for netball provision in Wales. For the first time, we have a dedicated resource for pre-competitive netball.

He added: “Bib will introduce netball to little girls and boys across Wales. Bib’s fun and inclusive adventures will help tots to develop physical literacy and prepare them for lifelong enjoyment of sport.”

She said: “Welsh Netball aims to be a key organisation to help create an active and healthy Wales. Netball tots is a hugely exciting development, it is innovative and an example of Welsh Netball taking risks and being bold, in order to help improve the wellbeing of a nation.

Jones added: “We are all very pleased to introduce our character ‘Bib’ who will encourage netball participation, across all Welsh communities. Netball tots is a first step in to physical activity and we want to ensure that we are offering a fun, inclusive and engaging way to be healthy and active. Our sport is a lifelong participation sport and we are looking forward to getting more children in Wales active with the help of Bib, to ensure the wellbeing of future generations.”

Physical literacy is the motivation, confidence, physical competence, knowledge, and understanding to value and take responsibility for engagement in physical activities for life. Netball tots aids in the development of these attributes through accessible, attractive and engaging sessions.

Welsh Netball is keen to hear from anyone with the passion to develop young people’s physical literacy and netball related skills in a safe and fun way. Netball clubs, schools, leisure facilities and private businesses can all apply to become netball tots providers providing they meet set criteria.

Further information on netball tots can be found at: www.welshnetball.com/tots