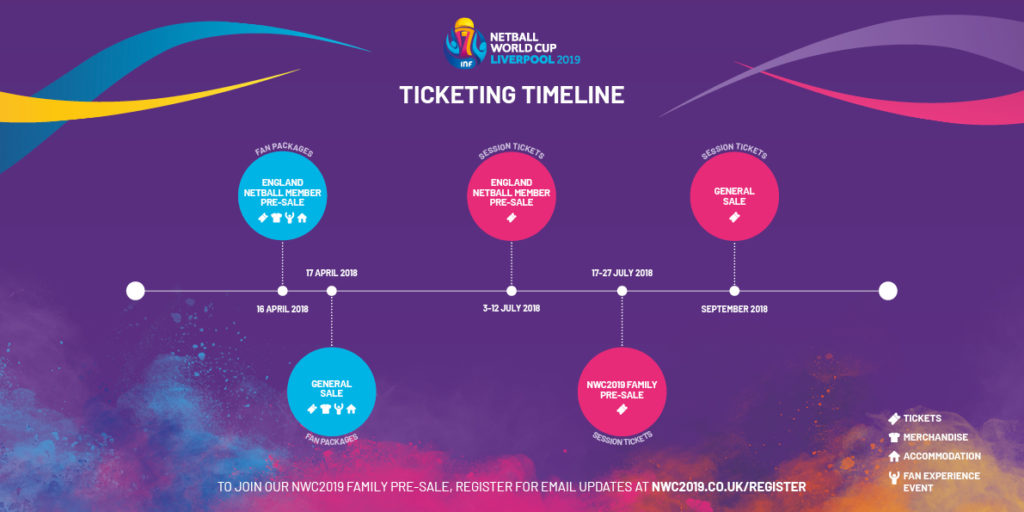 Organisers of the Netball World Cup 2019 have today announced an accessible ticket sales process for the tournament that aims to welcome new and existing fans to the event from all over the world.

The tournament – which is to be delivered by Netball World Cup 2019 Limited in partnership with the INF, England Netball, UK Sport, Liverpool City Council and ACC Liverpool – takes place at Liverpool’s Echo Arena next summer. The event is expected to be in high demand as English fans look forward to a once-in-a-generation home World Cup, with thousands of fans also expected to travel from overseas for the event.

There will be a range of tickets available across the 20 sessions – taking place from Friday 12 July to Sunday 21 July 2019 – including gold, silver and bronze level tickets as well as adult and junior prices.

Tickets start from just £10 for adults and £5 for children, meaning everyone has the opportunity to be part of what is set to be a dynamic and exciting competition.

Further information about the range of ticket prices for each stage of the competition is available on the event website.

Fan packages and tickets for the event will be released in three phases:

Phase one: fan packages
Fan packages will include tickets, accommodation, a merchandise voucher and a special fan experience event and will be available through the Netball World Cup 2019 Official Travel Office, Gullivers Sports Travel.

To find out more information about the packages available fans can register their interest directly with Gullivers Sports Travel at https://gulliverstravel.co.uk/event/netball-world-cup

Fan packages will be available for a selection of teams and matches at this stage, with the full competition schedule set to be confirmed in September 2018 following the final regional qualifying event in Singapore.

Demand is anticipated to be high, with thousands of people having already registered their interest.

Fans wishing to receive the latest news by email and access the Netball World Cup 2019 family pre-sale can register on the event website at https://www.nwc2019.co.uk/register/

“We have worked hard to ensure there is a range of ticket options available so as many people as possible can enjoy the event.

“We have made sure the event is accessible and affordable for people who want to attend as we look to engage committed netball fans, as well as anyone who just loves seeing elite-level sport.

“The phased approach to ticket sales will ensure that travelling fans, the netball family and those new to the sport will have a variety of opportunities to secure tickets for what is set to be a very special event.”

“UK Sport invests National Lottery funding into major sporting events to inspire the nation; attracting spectators to the Netball World Cup will play a key role in helping us achieve this and we are delighted that with ticket prices starting from just £5 for children and £10 for adults, everyone should have the chance to attend.”

“As the host venue and ticketing provider for Netball World Cup 2019, we are excited to have reached the next milestone in the journey to this global event.

“The ticketing arm of our business, Ticket Quarter, and our in-house marketing team will be providing key support for the Netball World Cup 2019 organisers over the coming weeks and months, to continue to grow the audience for this fantastic event.

We look forward to welcoming thousands of sports fans from across the world to Liverpool in 2019.”